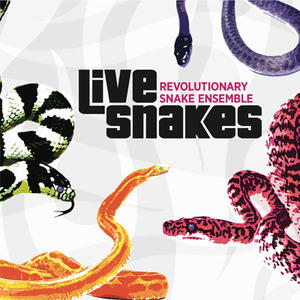 "New Orleans brass band meets Sun Ra and Ornette Coleman - fiery yet booty-shaking music - it's a stone cold killer diller! ... Most bands can't get the New Orleans stuff right, but the Revolutionary Snake Ensemble is one of the few who does and then takes it in fascinating directions."
OffBeat (New Orleans)

"Led by Ken Field, an alto saxophonist and flutist, this Boston-area band puts a premium on Mardi Gras-style rhythm - the opening track of its new album,Live Snakes, is aptly titled Parade- but also pursues a sinuous, writhing counterpoint, in ways that justify the band's name."
New York Times

"Mardi Gras on steroids...Take everything you thought you were familiar with in terms of the music of New Orleans and wipe the slate clean. Boston based Revolutionary Snake Ensemble takes that Crescent City vibe to the next level with a live release that will set your hair on fire! Spectacular"
CriticalJazz.com

"The music has depth, complexity, but never gets so esoteric that it loses its visceral kick."
Jed Gottlieb, Boston Herald

"A jubiliant celebration of music and life. This is one movin', groovin' funfest."
The Jazz Page

"Fun, musical, energetic and filled with agape-styled love, this disc is a reminder ... of why you're alive."
JazzWeekly

"Revolutionary Snake Ensemble finds joy in the rhythms of the street, in the melodies of the everyday, and in the shouts one creates against the darkness."
Richard B. Kamins, Step Tempest

"Mardi Gras on steroids...a live release that will set your hair on fire!" CriticalJazz.com