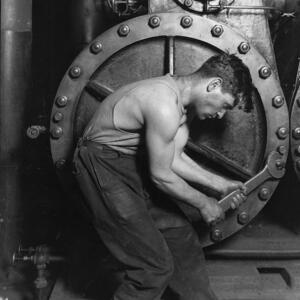 Ken Field is a Vandoren Performing Artist, and uses Vandoren reeds and mouthpieces for performance and recording. (vandoren.com)

Those Helicopters was produced separately by Winokur & Field, probably with Hicks engineering. Details are sketchy...

"The Men & Machines project had its origins in approximately 1986, when musician and visual artist Marc Pierson (now with the group Soft Pill) recorded a series of keyboard-based tracks on his home four-track cassette recorder. He enlisted engineer George Hicks to help on the project, and George transferred the material (grumbling all the way about the poor technical quality of the four-track recordings) to 1/2" analog 8-track tape at Ken Winokur's "Chicken Loft" studio near Boston. Ken Winokur is a percussionist and long-time friend who was then with the Boston group Bam Bam. He is currently with the internationally-touring Alloy Orchestra, performing live original music for silent films. Coincidentally (or maybe due to the incestuous nature of the Boston music scene) the Alloy Orchestra now includes Roger Miller, co-founder of Birdsongs of the Mesozoic, on keyboards. Ken added percussion tracks to Marc's original keyboard parts, and as an extra treat, Oupa Monareng and Raymond Mphunye Motau, the percussionists from South African group Malambo, in town for a concert, added some additional percussion. At that point, probably in 1987, prior to my joining Birdsongs and at the end of my time with the popular Boston psychedelic-funk group Skin, I added improvised saxophone tracks. I recorded several takes on each piece, and generally encouraged George to figure out a way to use all of them simultaneously. Looking back, this was a clear precursor to my later interest in layered saxophone improvisations as recorded on "Subterranea" and "Pictures of Motion". George then mixed the tracks, cutting tape, running it backwards, and doing all kinds of other tape-based studio tricks. The resultant body of material has been subsequently transferred to digital format, but has never been publicly released."
-Ken Field, Cambridge, Massachusetts, USA
November 2001