Revolutionary Snake Ensemble's annual Mardi Gras party at The Regattabar with special New Orleans guests Amadee Castenell & Henri Smith was a smash hit.  The audience was near-capacity, the band was smoking, the standing ovation was appreciated, and the grooves were deep!!  Thanks to all!

Ken Field was named Artist of the Month for February 2019 by the Somerville Arts Council.  A revealing interview with Arts Council member Matt Kaliner appears here. 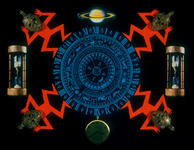 Field brought a unique program of live music and animated film to the ICA/Boston for a single special performance on Friday March 22nd, 2019 for a sold-out performance.  The performing ensemble consisted of Field, Stan Strickland, Lihi Haruvi, & Neil Leonard on alto saxes, with Savannah Marshall on drums.

Field teamed with his wife, award-winning independent animator Karen Aqua, to create soundtracks for her animated films for several decades until her untimely passing in 2011. In 2017 Field was invited by the Animator Festival (Poland) to perform live for a program of Aqua's films and assembled an unusual instrumentation of four alto saxophones and a drummer. The resultant performance was celebrated as the highlight of the festival.

Field completed a new body of music for Revolutionary Snake Ensemble and for the HONK!Oz Hoot Band during a productive Composer in Residence fellowship at the Ucross Foundation in Wyoming during October 2018.

Celebrity Series selects Field to curate "Jazz Along the Charles"

The Celebrity Series of Boston selected Ken Field to curate music for their successful "Jazz Along the Charles" project.  Field's process as curator is highlighted here.  Established by Aaron Richmond in 1938, the Celebrity Series has evolved into New England's major presenting organization with over 200 performance and outreach activities annually.  Jazz Along the Charles took place on the afternoon of Sunday September 23rd, 2018.  25 jazz ensembles gathered at a series of connected, walkable locations along the Charles River Esplanade, interpreting a list of Boston-related songs curated by Field in one collective concert that celebrated the great jazz community of Boston.  Audience was estimated at 10,000.